There are a lot of “firsts” after something as life-changing as a mastectomy.

Two days after surgery, I left the house for the first time. It was a production: getting in the truck, figuring out how to buckle in, bracing for the bumps and potholes in the road. But it was a success and I also had my first beer, a Southern Tier Pumpking, my favorite fall beer (yes, I am one of those people who loves pumpkin beer, thank you very much). Amelia drove us to a friend’s lake house and we sat on the dock for two hours on a beautiful fall day. Cayuga Lake feels like the ocean sometimes; there are areas where you can’t see where land begins again. Feeling small could be regarded as a bad thing, but this kind of feeling small is fantastic. I am so minuscule in comparison to the lake that my perceptions of difficulty or problems become just as tiny. Even if it’s only for two hours, it’s a relief.

Day three I went for a walk around the neighborhood with Amelia. It was a production as well, and included tying my shoes and pinning my drainage bulbs out of sight (now referred to as “my balls”). I was markedly slower, but it felt great to walk. I do love fall. I had a great deal of trepidation because I didn’t want to see anyone. “How are you” isn’t working for me right now. I’m already brutally honest so my response very well might be, “Other than having a body part amputated, I’m ok. Thanks.”

Day three was a big day of firsts: We also removed the bandage and I saw my chest for the first time. I don’t think any other first can be as hard as that one. I wrote about it in detail already.

Day four I tried on one of my shirts. It was incredibly unnerving and disorienting to see how it fits me now.

Day six was my first day alone. It was very dreary and I couldn’t help but think about the people who have been or are alone right now as they try to heal. Damn, I don’t want to be someone who overuses words like ‘grateful’ and ‘thankful,’ but I do feel thankful.

Day seven was my first hike. Amelia and I walked into Taughannock Falls. This walk was different than going around the neighborhood where we basically see no one. I had to pass many people on the trail. People who hike are perky people. They nearly always want to make eye contact and say hello. Ugh. Hi, I’m Leah…See my dangly balls and my one big boob?

Day eight was my first trip to Ithaca. One word – Wegman’s. We shopped and managed to not see anyone we knew. Success! It’s not that I’m avoiding people, by the way. It’s that people now see me as an illness instead of a person. I Am Cancer. 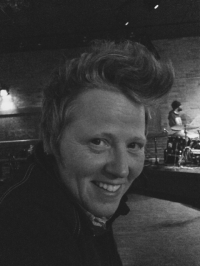